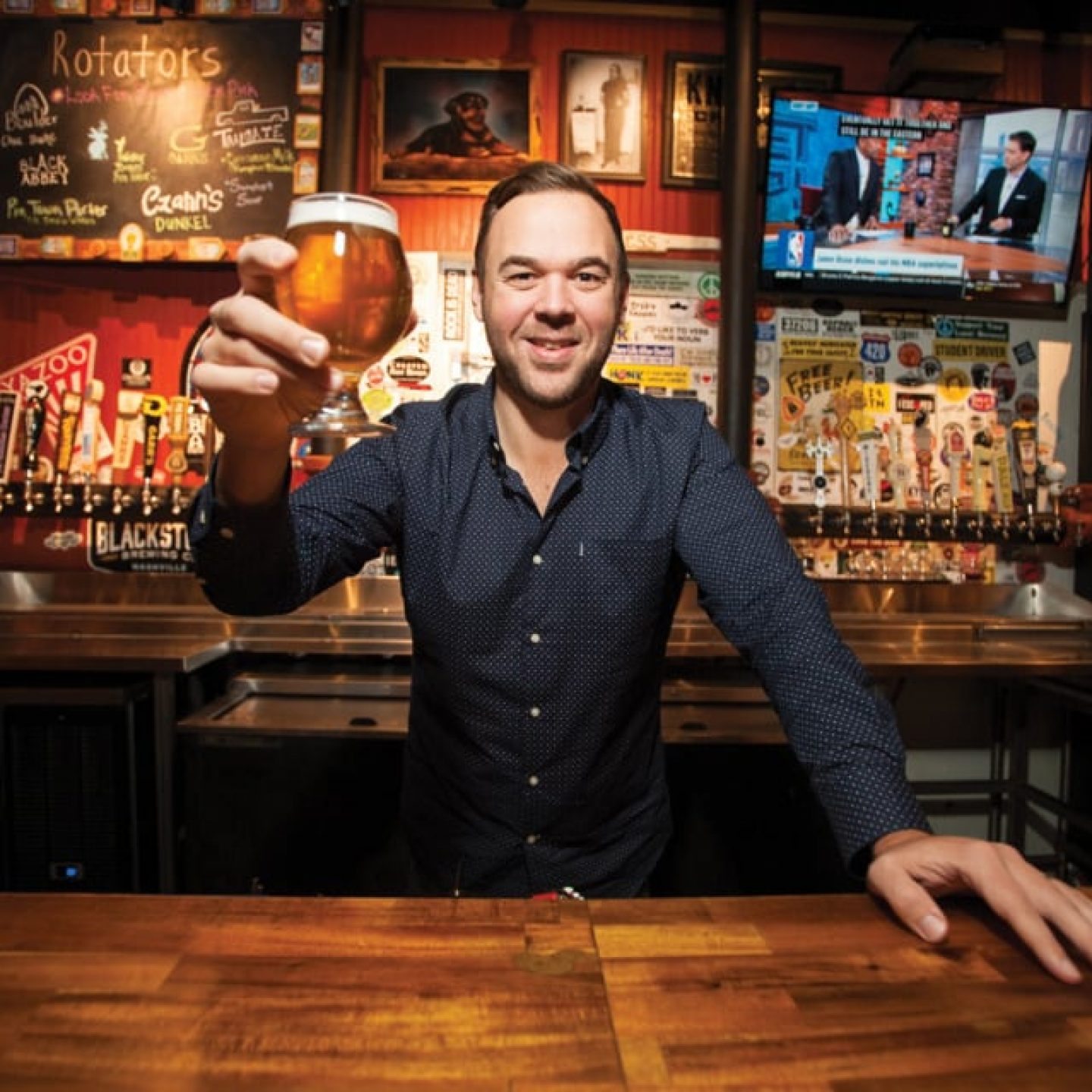 It’s hard to believe, but 10 years ago the Nashville craft beer scene was just in a nascent stage. Yazoo and Blackstone were really the only production breweries putting out local brews, and the tap handles at most bars were dominated by macrobrewery products like Bud, Miller and Coors. Sierra Nevada Pale Ale and Fat Tire from New Belgium were still considered exotic, and even places that did feature more than a handful (pitcherful?) of interesting beers — like Beer Sellar and Flying Saucer — tended to focus on international offerings rather than local or regional crafts.

Enter Austin Ray, a fledgling restaurateur fresh from managing Bar23 and City Hall in the Gulch, who cast an eye on sharing his love of craft beers with his native Nashville. Ray discovered a space at 2535 Eighth Ave. S., the former site of The Chute — Nashville’s oldest gay bar at the time of its closing. He set to work to open what would become known as Melrose Pub, later renamed M.L.Rose after the opening of a second location on Charlotte, which was later followed by a third in the Capitol View neighborhood. “We inherited the leaky, moldy shell of The Chute,” Ray recalls of the renovation in Melrose. “We discovered a few remnants of the old place, but nothing as fun as we hoped to find.”

In addition to, of course, hoping to achieve some financial success from his new bar venture, Ray had aspirations to raise the bar on Nashville’s craft beer palate. “I wanted to move the needle for ourselves and our neighborhood. I’d always loved 12 South Taproom because I could try something new every day.” Ray’s love of craft beer was still pretty unusual for most consumers in 2008, and he developed his tastes at an early age. Actually, too early.

“My friends and I worked at Corner Market in Belle Meade, where they sold all the beers you couldn’t get at Kroger. We were too young to to drink, but the deli workers bought beers for us. We always drank imported beers, so that’s where I began my love affair with great beer.”

As Ray was putting the final touches on his new Melrose bar and coming up with the eclectic decor that would make it feel like a real neighborhood hang, a newcomer to the scene was about to make his own impact. Kurt Strickmaker is the owner of Bounty Bev, a distributor that concentrates on domestic craft beers. When he moved to town a decade ago, he encountered the same environment that Ray was up against.

“Ten years ago, I moved to this great town, but at the time it was not such a great beer town,” says Strickmaker. “It took a year, but Bounty was born, and timing was everything for our little brew crew. Some gave us credit for changing the beer scene by bringing ‘better’ beer in from Oregon and California. But really, another movement was in the making: the birth of more local craft beer.

“Yazoo, Blackstone, Big River, Boscos and the Market Streets of the world were all the consumer could find,” he continues. “It took a guy like [Yazoo founder] Linus Hall to turn our local beer scene on its head by self-distributing, installing draft systems and cleaning his own draft lines. That led to more awareness, which led to more education, which led to better beer. Other people followed, and the likes of Jackalope and many others have contributed to almost 500 percent growth of local breweries in less than 10 years. We now live in a better beer town!”

Jackalope founder and owner Bailey Spaulding concurs with Strickmaker. “I think the newer folks, including us at Jackalope, owe a great debt to breweries like Yazoo and Blackstone, who paved the way for us,” she says. “When Jackalope opened, we were the first brewery to open in Nashville in eight years. Luckily, the craft beer movement was in full swing in other parts of the country, and the concept of craft beer wasn’t totally foreign, so it wasn’t too hard to convince folks to put us on draft. I think at least 15 breweries have opened in the area in the seven years since then, so it’s a much different game. What’s great is that we each have our own identity and style of brewing that we are known for, so while we may be competing for taps, there’s a good amount of diversity even amongst the local beer options.”

Getting on tap at M.L.Rose was — and still is — a big deal for local brewers. Ray and his staff hold extensive quarterly tasting panels to choose which beers will be featured on their beer menu, a rotating roster of options divided into categories like “Smooth & Easy” and “Big Bold Hops.” From the very beginning, Ray has sought to stay ahead of craft beer trends.

“We watched Bud Light sales decline and Brooklyn Lager grow, and realized that Nashville’s palate was totally changing,” he says. “We became the No. 1 seller of Fat Tire in the state and knew that we could add more craft beers.” (Spaulding says with a chuckle, “Our proudest moment was when Jackalope took over the Bud Light tap at M.L.Rose!”)

Ray was an early supporter of local brewers, long before they began to earn regional and national acclaim — M.L.Rose even tapped the first keg of Black Abbey that rolled out of the brewery. “We were big fans of Black Abbey right away,” he recalls. “They represented a new level of style and quality in Nashville, and their Rose Belgian Blonde is a great gateway for new craft beer drinkers. Plus, it doesn’t hurt that we both have ‘Rose’ in our names.”

Black Abbey’s Carl Meier offers a little more historical perspective. “Some of the best beer I had in Nashville 15 years ago was made by homebrewers,” he says. “Boscos, Blackstone and Market Street were paving the way for craft beer in Nashville with their pubs, but the broad market availability of craft beer was somewhat limited compared to other cities Nashville’s size.

“My hat is off to folks like Linus and Kent Taylor at Blackstone,” says Meier. “Opening a brewery is a real act of trust; trust that folks who liked your homebrewed beer will actually buy it and continue to buy it over other options. Being first to market in different moments in time is a big risk and a real leap of faith. It has been our experience that Nashville is a town that fiercely supports its own.”

As M.L.Rose celebrates a decade of introducing Nashville’s drinking class to new and better beers, Ray says he remains committed to continuing to celebrate crafts on draft.

“We want this to be a safe place for people to try something new — edgier things,” says Ray. “What started as a personal hobby has become a way for my team and I to discover new beers and share them with our friends and neighbors. It’s the best job I have to do!”